A ‘potion’ comprising flour, butter and ketchup among other things, was imbibed by a group of girls aged between six and 11 to highlight the lack of clean drinking water available to children in Africa.

A ‘potion’ comprising flour, butter and ketchup among other things, was imbibed by a group of girls aged between six and 11 to highlight the lack of clean drinking water available to children in Africa.
And by raising £86 for the charity Water Aid as a result of their actions, the ‘Crouch Hall crew’ (Ella, Sophie and Georgia Harrison, Maisie and Annie Graham, Hannah and Emily Thomas and Gabby Bradley) have won this month’s The Maltings Community Hero Award.
Eleven-year-old Hannah said: “We wanted to make a potion out of anything edible so we went in to our houses and found edible things and mixed it together.”
“Mayonnaise, salt and apple juice” was also added to the mixture, according to Hannah.
She went on: “Then we went to neighbours’ houses and said ‘we’re going to drink this – people in Africa have to drink disgusting water so we’re going to do that, too’ and asked if they could give us money if we drank a bit of the water.”
The crew’s fundraising efforts this year also included a sponsored run around Redbourn Common.
Phil Corrigan, centre manager of the Maltings Shopping Centre, said: “It is wonderful to see a group of young children so focused on helping others – it seems like it’s their hobby to raise money for charities.
“The children were all so enthusiastic; it was a pleasure to meet them and an honour to crown each and every one of them a Maltings Community Hero.”
Last year the girls raised £50 for Downs Syndrome charities by organising a cake sale, washing cars, painting nails and holding a jumble sale.
The Crouch Hall Crew donated their £100 prize straight to the RSPCA and the animal charity has been unanimously chosen as the focus of next summer’s fundraising efforts because, according to Annie and Maisie’s mum, Jane, “they all have pets”.
Phil described the girls as an “inspiration” and said: “The Maltings is very proud to be a part of this campaign and will continue to support the Crouch Hall Crew’s fundraising efforts and help spread the word.
“Congratulations to all, very well deserved.” 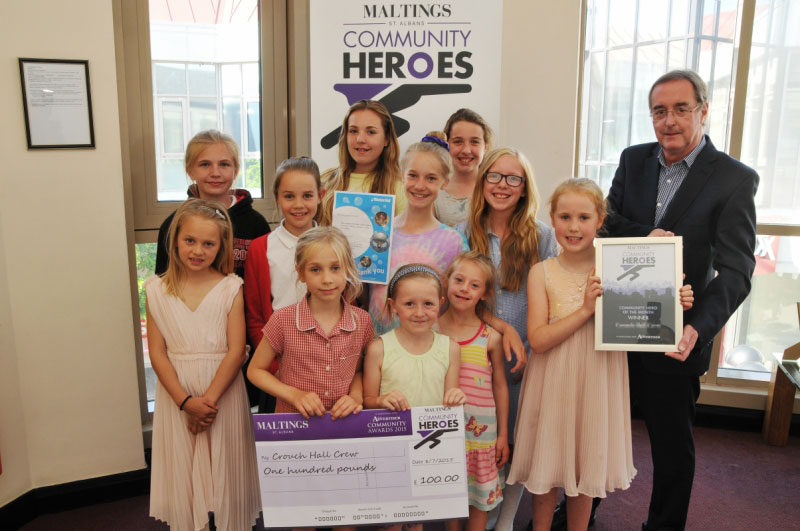