A brave pair of bikers, who raised more than £21,000 for a little girl battling a genetic condition by pedaling more than 260 miles, have been recognised for their efforts.

A brave pair of bikers, who raised more than £21,000 for a little girl battling a genetic condition by pedalling more than 260 miles, have been recognised for their efforts.
David Orchard, uncle of Bessie Davis, six – who suffers from little known neurofibromatosis 1 (NF1) – and family neighbour Daniel Sizer of Ladysmith Road, have been crowned winners of this month’s The Maltings Community Hero Awards.

The daring duo cycled from Plymouth to St Albans in an epic four-day ride at the end of April and were given a hero’s welcome at a Finish Fete at Bessie’s school, Alban City, in Hatfield Road. David, who Bessie calls Uncle Dudu, said: “When I first thought about doing something like this it was to raise awareness and to help fundraise for the Neuro Foundation and Great Ormond Street Hospital, where Bessie has been treated.
“I only thought I would raise a couple of hundred pounds but it just snowballed and the response locally, particularly from Bessie’s friends at the school who all knew her before she was ill and have seen her progress, has been amazing.”

Though the ride was challenging, the pair said the highlight of the trip was meeting a woman from Crediton in Devon, who suffers from NF1, who had tracked the team through their social media Follow Bessie Bear campaign. David said: “It was really reassuring to see a girl in her 20s who was healthy and able-bodied. “We were actually really lucky
the whole time as these things go as we only had three punctures the whole time and on our way back, we actually had to stop in Berkhamsted for a coffee as we were going to be early for our welcome party!” 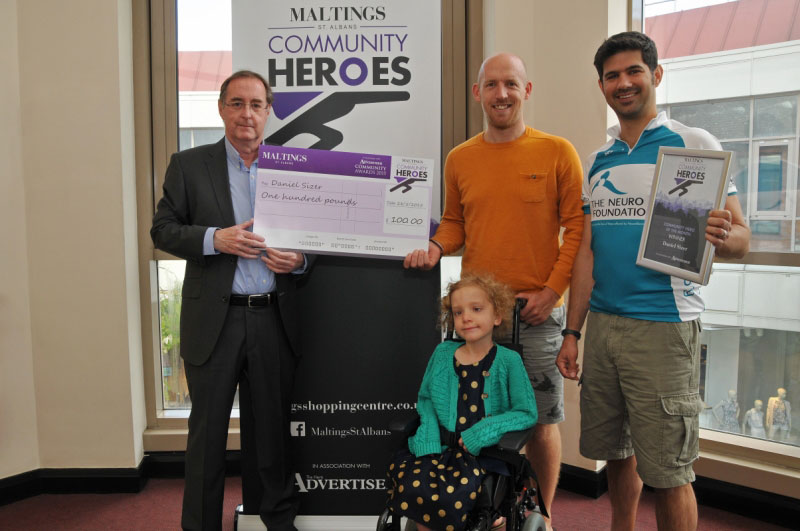